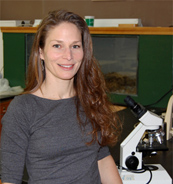 The Alaska Department of Education & Early Development has named Cara Heitz, a Jr./Sr. High School science and health teacher in Cordova, the Alaska Teacher of the Year for 2012. The announcement was made November 6 at the annual conference of the Association of Alaska School Boards in Anchorage. Heitz’s term begins January 1, 2012.

“It is a pleasure to recognize an excellent science educator,” said Alaska Education Commissioner Mike Hanley in a statement. “Ms. Heitz represents all of those teachers whose infectious enthusiasm for, and knowledge of, their subjects brings out the best in their students.”

“My confidence in her role in our district is maintained at a premium level, as she is a great team player, a visionary, and a great advocate for all of Alaska’s youth” said Cordova School District Superintendent Jim Nygaard.

Heitz has taught for 10 years, five in her present position. She holds a bachelor’s degree in zoology from Miami University of Ohio and completed her coursework toward a medical doctorate at the MCP/Hahnemann School of Medicine in Philadelphia. When Heitz was a medical student, she worked with high school students and found her calling as an educator.

Heitz said her students are empowered to think freely, as well as encouraged and supported in their learning. She wants her students to realize that learning can be both enlightening and thrilling, and that science is an important and relevant aspect of their life, past present and future.